After an adventurous summer in the Arctic, I returned to my desk to dig into the heap of data which we collected. In the first place we collected 25 GPS-tracks showing the migration routes of Barnacle Geese, but it gets more exiting when we can link this to what the geese did on the breeding grounds. We followed the nests of these geese in particular, but also weighed the geese on their nests and even samples the feathers of the small goslings right when they emerged from their eggs. By linking all these data, we can get an idea how individual geese with particular migration schedules differ in their performance on the breeding grounds. If you migrate fast as a goose, can you still bring enough body reserves to the breeding grounds to lay enough eggs and incubate them? And where do the resources to produce this egg come from, all the way from the Netherlands or do the geese use local grass to lay their eggs?

To start answering these questions, we first take a look at the migration schedules. As I said, we collected tracks of 25 geese that made their spring migration to Tobseda. These geese differed both in the places where they stopped during migration as well as their timing of migration. I have made 3 categories of geese: The yellow “Baltic” geese made a stopover in the Baltic region (South-East Sweden, South-West Finland, Estonia), the blue “Arctic” geese made a stopover in the Russian Arctic (White Sea, Kanin peninsula) before the breeding grounds, while the red “Direct” geese flew to the breeding grounds hardly without stopping in between, some in only 4 days! (The green “Early” goose is the exception, leaving very early and stopping often)

So Barnacle geese differ in their migration schedules, but what consequences does this have? One important factor regulating the reproductive success of geese nesting in the Arctic is the moment in the year they initiate nesting. As the season is very short, the geese that start nesting early are often the most successful. Their chicks not only have a longer time to feed before they have to head back to their wintering area in the Netherlands, they also meet the best quality of grass that grows early in the season. So any geese would like to start nesting early, but in order to do so they need to have enough body reserves to lay their eggs and incubate them for about a month. Do birds that differ in migration strategies also differ in the date of nest initiation and body weight on arrival? 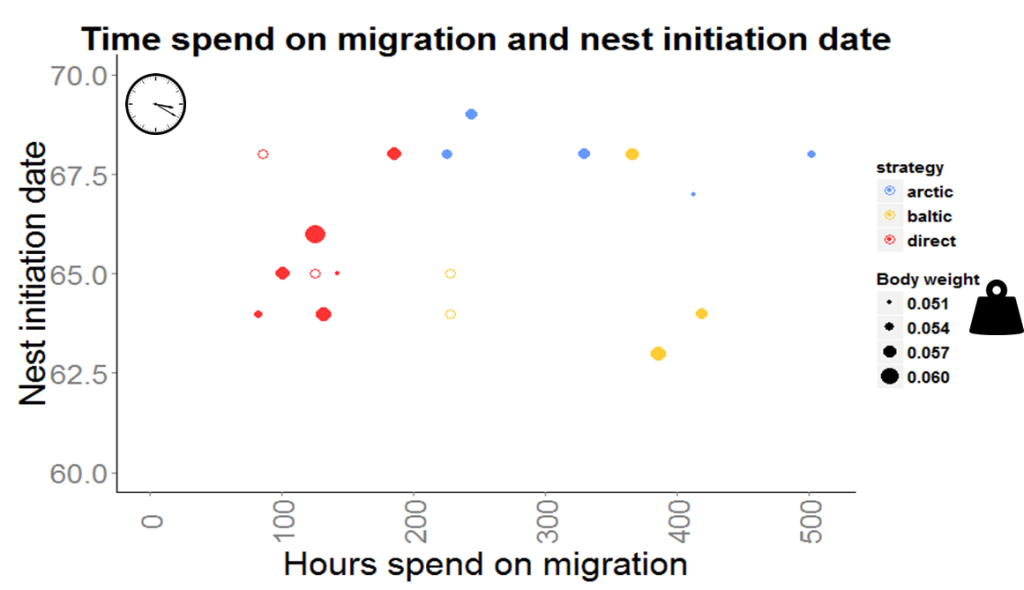 In the graph you can see all the geese from which we could download their spring migration track and also find their nest. From the spring migration track we extracted the migration time (from winter area to breeding colony) in hours, and plotted this against the moment this particular goose started its nest (the units might confuse you, as we plotted initiation day in days since April 1st). While the geese with direct and baltic migration strategies all start their nest all roughly around “April 65th” (which is equal to June 4th), the geese which use an Arctic stopover all start around 4 days later. This might not sound like a lot, but these 4 days might just make the difference to migrate back with 4 healthy chicks, or no chicks at all. Some geese we also weighed on the nest, and their body weight is indicated by the size of the dots. You can see that especially geese that use an Arctic stopover are extremely light, and probably less able to cope with a long incubation period.

Some geese are not only able to directly migrate to their Russian breeding grounds, they also initiate their nests early and arrive with enough body weight! That these geese are able to pull this off is surprising and very new, but also raises a new question: how can they do it? Luckily we can really closely follow these geese with the new technology, as the GPS-loggers which we have equipped our birds with not only record GPS positions, but also the acceleration of the bird. A so-called ‘accelerometer’ can be find in many modern devices such as your phone, and measures your speed of acceleration and movement. It is for example used in your training app to measure the steps you take, or even simpler, to measure whether your screen is tilted so it should adjust to ‘landscape’ or ‘portrait’ mode. Using the accelerometer in the GPS-loggers, we can see what behaviour (such as flying, walking, resting or grazing) the goose is displaying at the moment of measurement. In this way, we know exactly how many hours the geese forage per day and where. 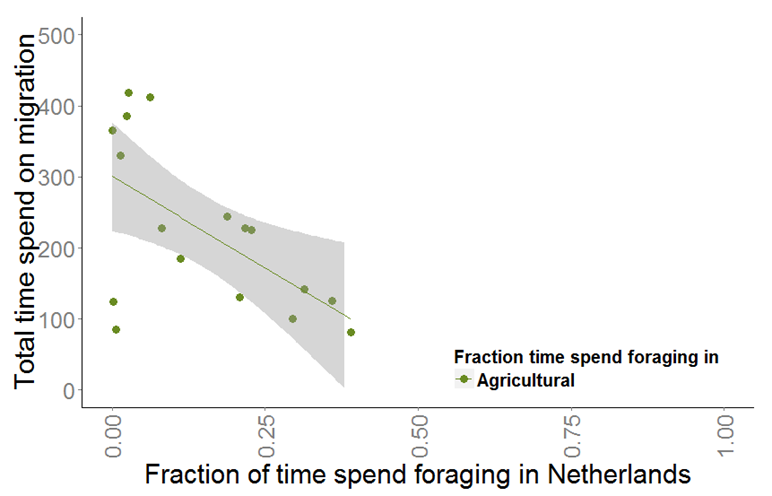 Here we plotted again the number of hours spend on migration but now on the y-axis, and the geese that use a direct migration are found in the lower bottom of the graph (less than 200 hours). We plotted this against the fraction of time spend foraging in the Netherlands, and in particular in agricultural areas. Prior to migration, barnacle geese traditionally used saltmarsh areas to graze, but over the past decades they have switched more and more to agricultural areas. We can see that the geese that are able to use a direct migration strategy mostly forage on agricultural areas. The grass there might be richer in energy, and could be the way to fuel up faster and take a direct migration route. The intensification of agriculture might thus have enabled geese to use direct and maybe more efficient migration schedules, allowing them to better cope with climate warming in the Arctic.