Three weeks ago we returned from the Russian Arctic, back into late summer Netherlands. The geese will stay a little bit longer, and will probably start flying back to the south this week. Our time in Tobseda was great, and we were able to collect some great results for our research. 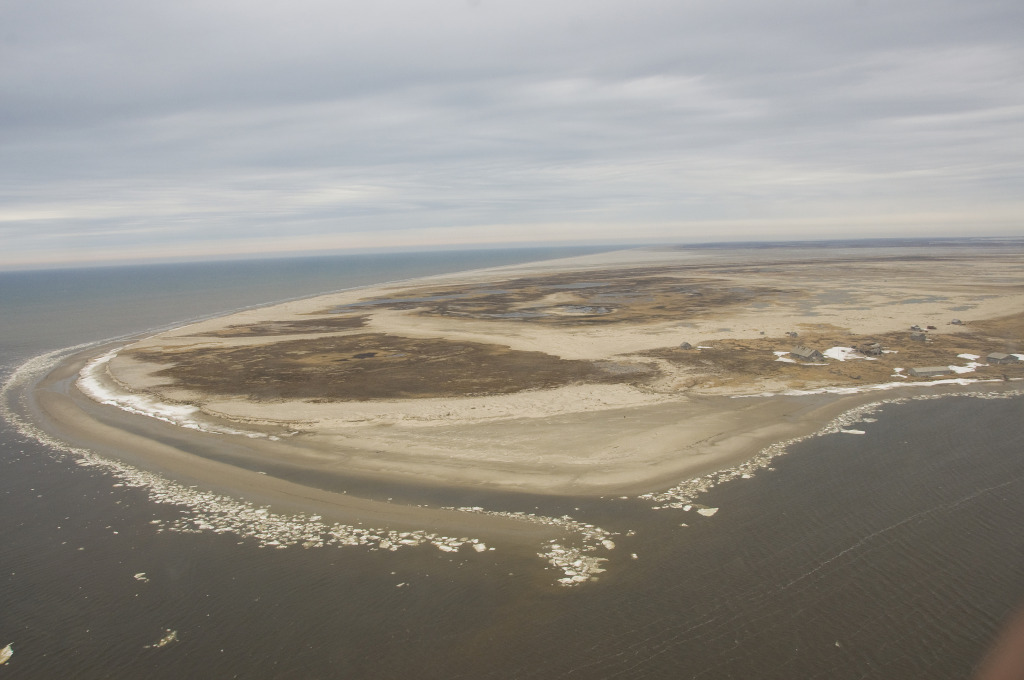 The village of Tobseda on arrival – little snow in the end of May! (Jasper Koster).

When we arrived the 28th of May, there was very little snow, much less than usual. Most of the Barnacle Geese had arrived before us, and were settling into the colony. We could not locate any Barnacle Goose with a GPS-logger yet, but set out our relays in order to track them. Hunters looking to shoot overflying geese were dissapointed, since migration was largely over. They still shot quite a few of the Barnacle Geese in the colony, and this is when we saw the first ‘logger-bird’ – Shura, the bird that we downloaded on Schiermonnikoog this Spring, had been shot on arrival. A real shame. Luckily it did not take long before other loggerbirds started showing up in the colony, and eventually we recorded the presence of 30 loggerbirds (of the 40 we tagged last year). Of some birds we lost track, but in total we could download data from 24 birds. 18 of these started nesting in the colony.

From the GPS tracks of these birds, it became clear that they seem to migrate using three different strategies. Some geese leave the Netherlands in the end of April / early May and stay in the Baltic region to gain fat reserves. This is know as the classic strategy, and it is assumed that most Russian Barnacle Geese used this strategy in the past. Other geese left the Netherlands later, around mid-May, but all geese crossed the landmass between the Baltic Sea and the White Sea at the same moment, around the 19th of May. Although we expected geese to use Arctic stopover sites to fatten up before arrival in Tobseda, most geese continued flying and finished the complete journey between the Netherlands and the breeding grounds in 5 days. Only some geese used Arctic stopover sites around the White Sea and Kanin peninsula. 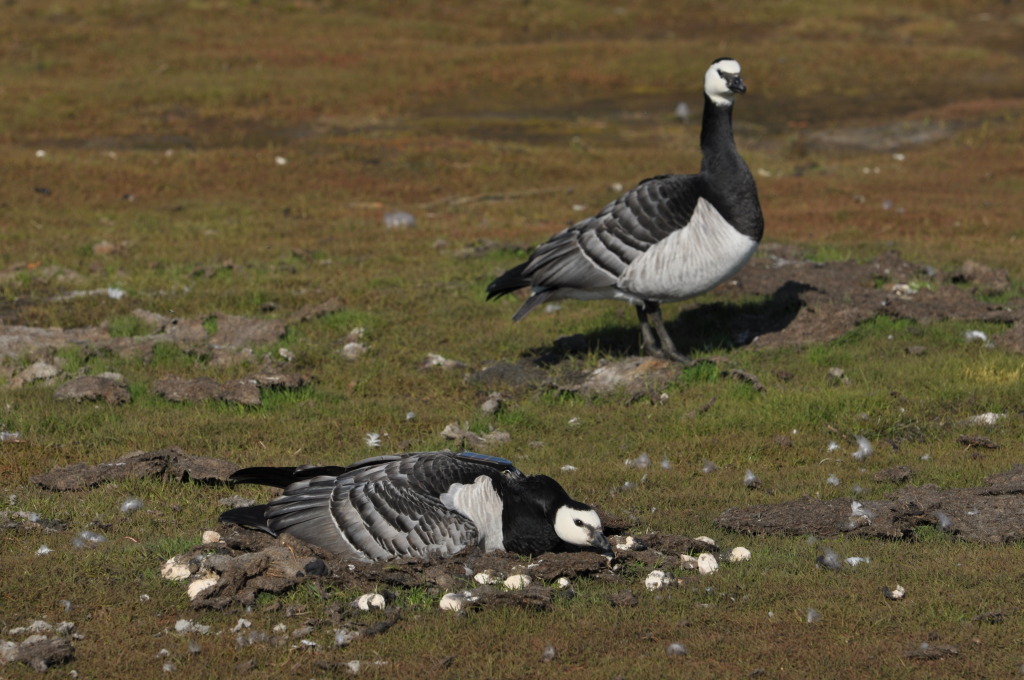 Loggerbird ‘Maria’ on het nest in the saltmarsh (Olga Pokrovskaya).

We monitored nests in the whole colony and kept track on the number of eggs and the initiation of nesting for all 650 nests. We payed special attention on the nests of loggerbirds: One of the first striking things is that all geese using Arctic stopovers arrived late and bred later than the geese using other migration strategies. Next to normal monitoring we weighed each loggerbird al multiple moments using a platform scale which we put under the nest. This way, we can relate the migration data to data of nesting success, and calculate a weight on the initiation of nesting. Also we collected the shit that we found around the nest every week, so we could estimate the amount of food a female takes in during this period of time. 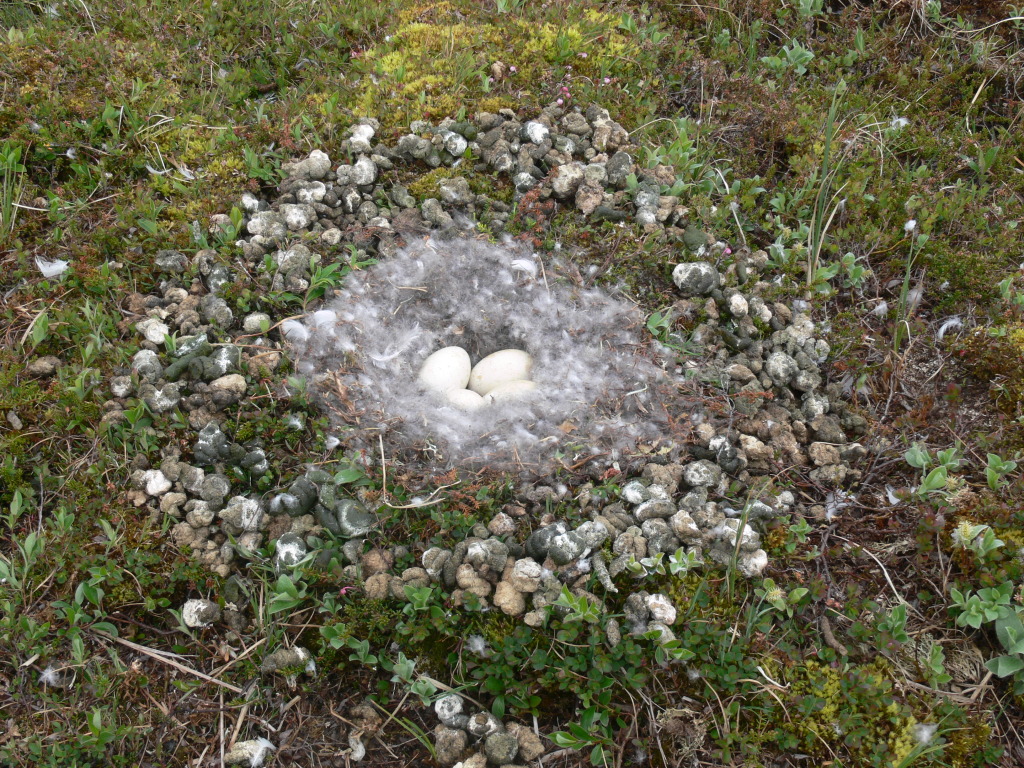 Female Barnacle Geese spend 25 days almost contentiously on the nest – this is the result (Bart Nolet).

We aimed to visit the nest at the moment of hatching, in order to see how many eggs actually hatched, and to tag the chicks. Using a metal mark, we could recognize them later in the season and provide them with colour bands. In July we spend a long time in hides to observe the geese and count the number of chicks in each family, so we could make estimations on their survival. Also we wanted to know how the geese divide their time. In order to get to know this, we had to do 24 hour observations on the geese – long periods of time in the hide, quite a challenge! As soon as the adults started moulting their wing feathers, we could start catching the geese. 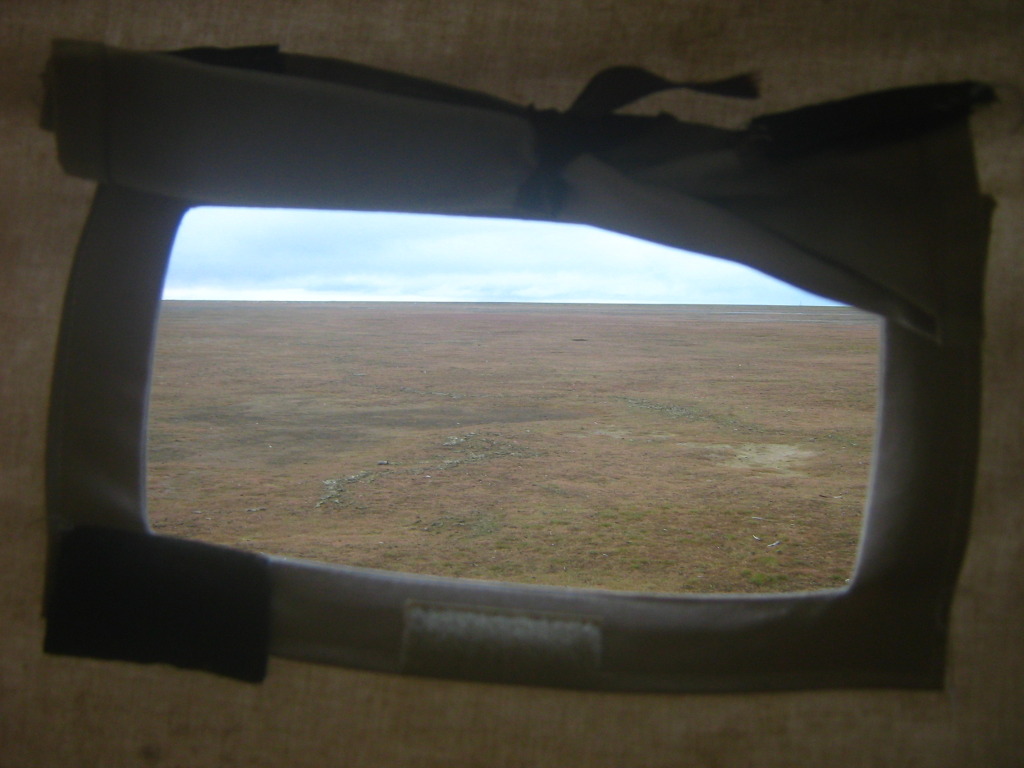 Our aim during the moult catch was to 1) recapture individuals which we equipped with geolocators, loggers which can only be read out after recapture, and 2) to catch chicks which were marked on the nest, so we could measure growh. During moult the geese cannot fly, and they tend to escape to the water in large flocks. We set up a funnel-shaped net, and used boats to drive the geese into our net. We were able to catch big groups of non-breeders (without chicks), and many smaller flocks of breeders with their young. In total, we could recapture 28 birds with a geolocator! Also we were able to recapture many of the chicks which we gave a webtag. In total we caught 4600 geese, of which we gave about 350 a colour ring combination. 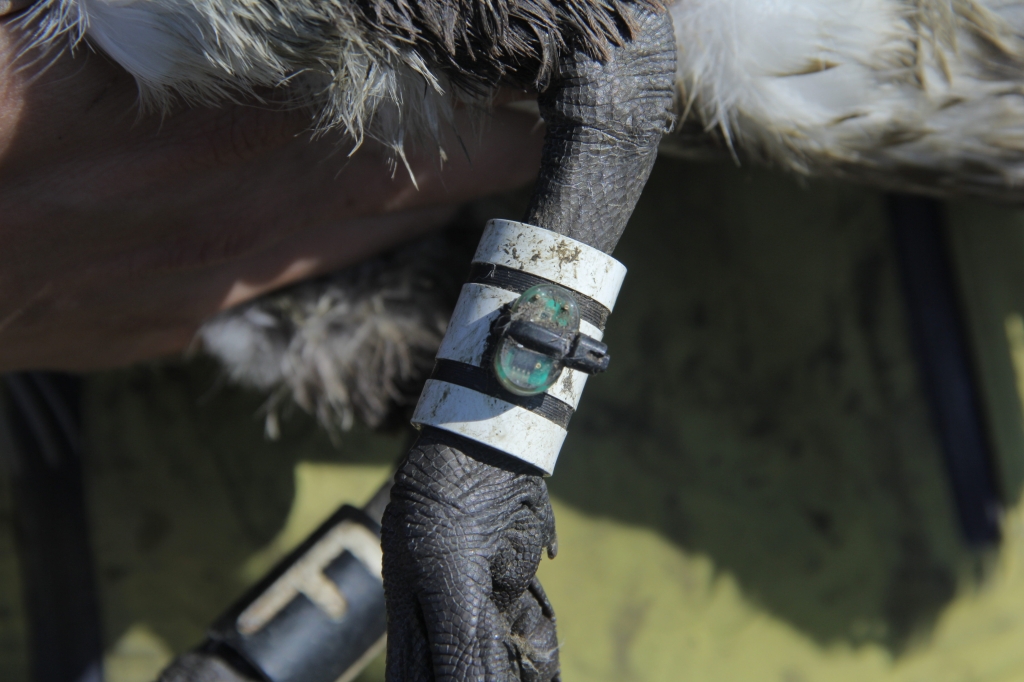 A geolocator on the white colourring (Stefan Sand) 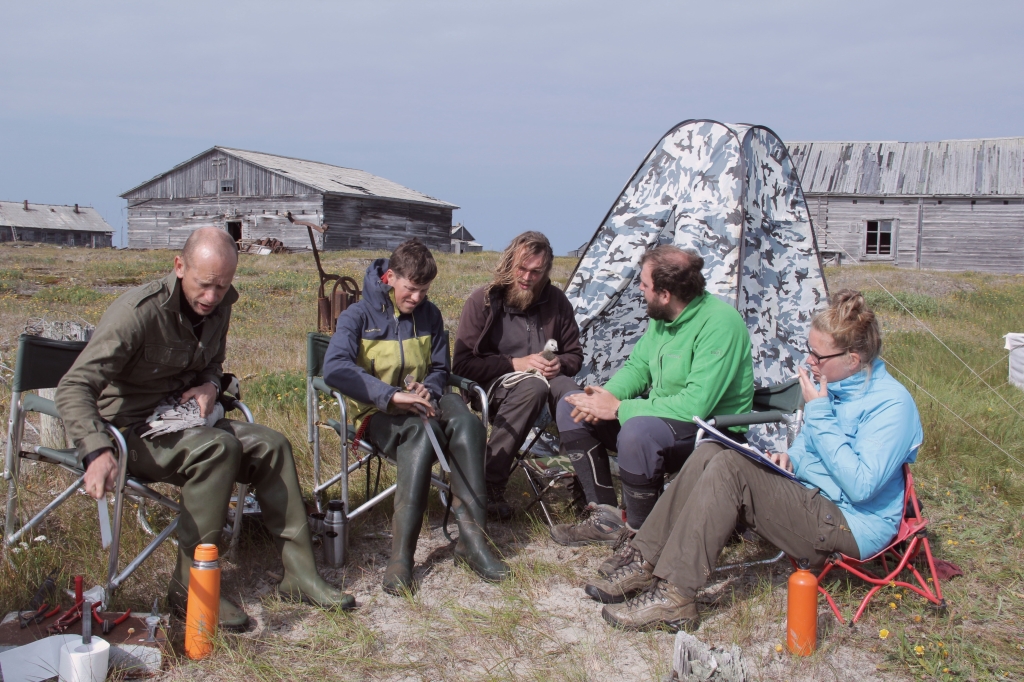 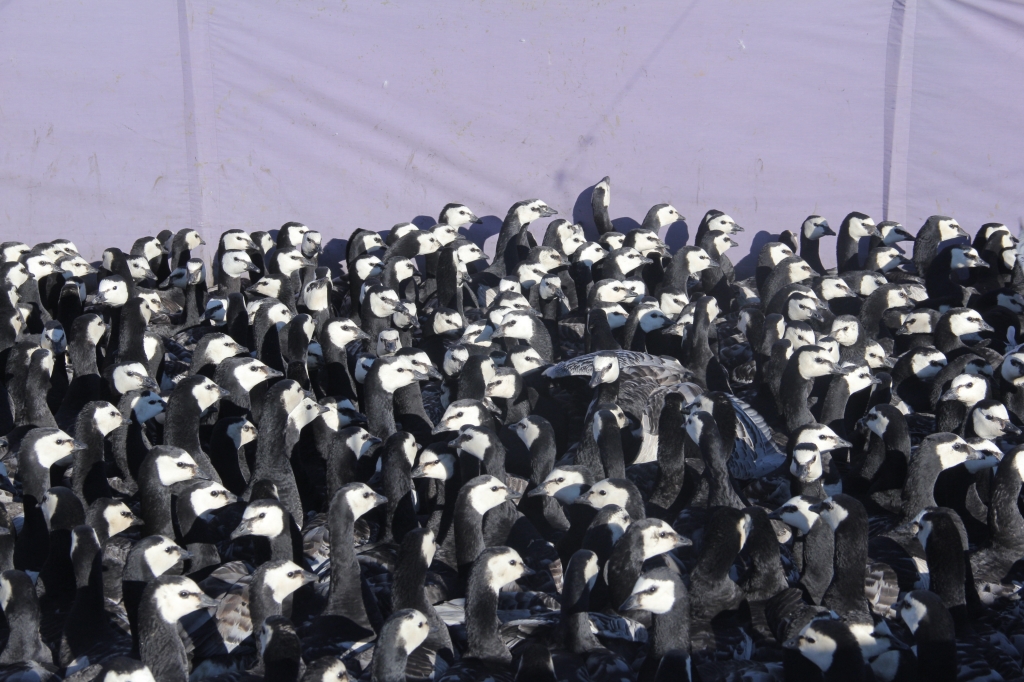 A group of non-breeders in the catching pen (Stefan Sand).

Now it the time to analyse the data and further look into the question – can these geese deal with Arctic Amplification? Meanwhile, Stefan has recorded our activities in Tobseda on film, and has prepared an item which will be show on Dutch television! You can watch on September 23th, NPO 2 at 19:20. Here you can watch this item and other movies Stefan made during the summer.